Start here! These posts and videos teach you the basics of Docker.

What if I told you that I have grown these cactus seedlings based on a Youtube video? Not even just any video, the first one that comes right up for the search term “growing cactus from seeds” on Youtube.

“Cactusmain” (the author) explained everything I needed to know about cactus seedlings in a 12 minute video. Don’t worry the video is embedded down here. This knowledge helped me survive the first couple of months and brought me here. I had some difficulties on the way, that I managed to solve alone.

I guess people have different reasons for growing cactus from seeds. Mine was a little desperate when I first started out.

I have a cactus that got injured when it was young, you can tell by the large brown spot on its body. I love this cactus a lot, because it is one of my first ones and it brings white flowers and little red fruits every year. 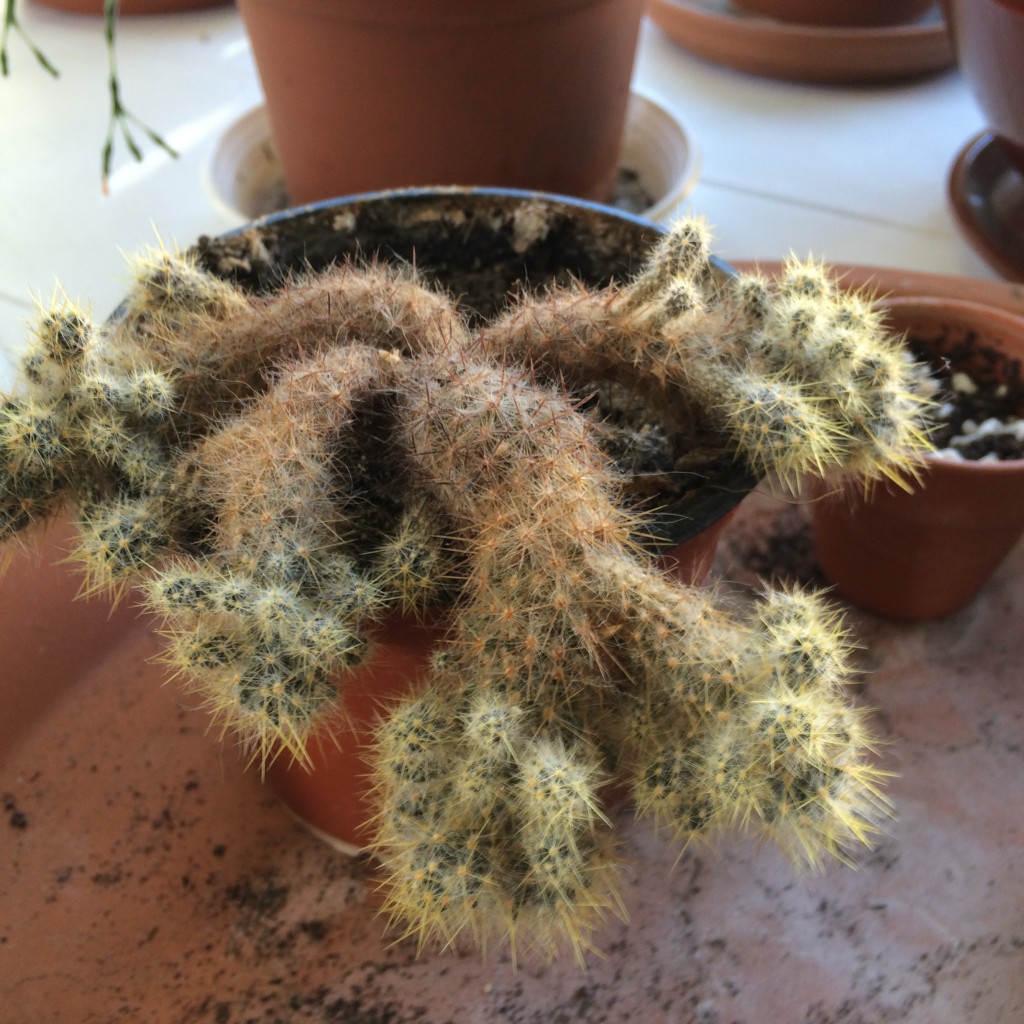 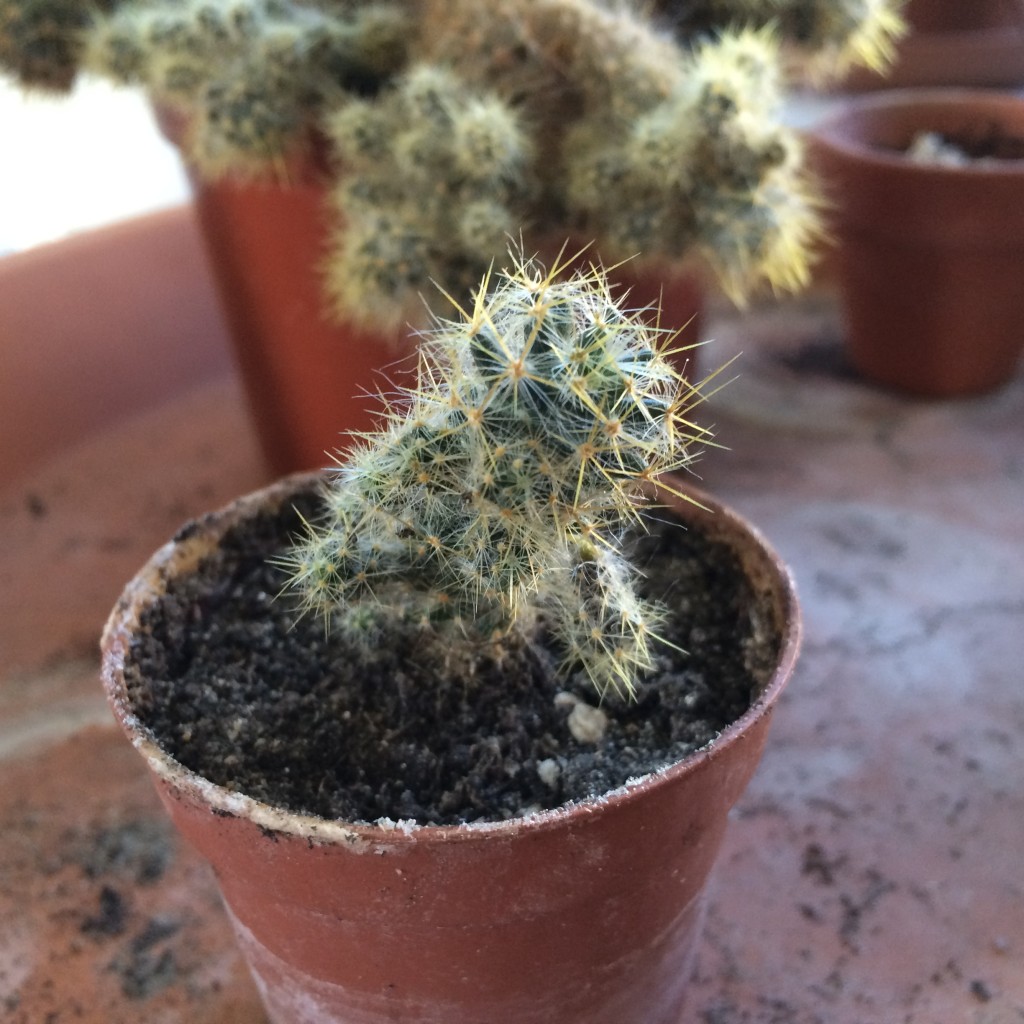 So first I started propagation from a cutting that you can see on the second picture above. This plant looks healthy and has grown a lot. I did not make this process too complicated, I read a general pdf by the University of Arizona and moved on.

I planted the cutting in the late spring and I saw the first signs of growth in a matter of weeks.

Then I thought I would be very happy to use the seeds of this cactus to create many more little plants so that my original cactus lives on in its seedlings. Yeah, I feel a bit guilty, no doubt the injury was caused by my lack of experience.

So I harvested the fruits and extracted the seeds with a swiss knife. I ate the fruits afterwards and I’m still alive. Then it was time for the video by Cactusmain.

I planted my seeds into the little pots you see on the pictures, these are about 6 cm wide (little more than 2 inches) and I put a good number of seeds in there, like 6 or more. I wanted to make sure I have some contingency, I expected that some seeds will not germinate.

I put my seeds into soil as shown in the video. First I placed the pots into a glass bowl and covered them. I put a regular desk lamp above the seeds and turned it on for 8 hours a day.

For the first couple of months, yes months, nothing happened. I had a look at the pots every day and tried to figure out what’s going on. Cactus seeds are not very talkative, so I guess it was only my imagination that read some strange signs in those days.

One fact was obvious, the bowl was not moist inside, and that worried me. I added some water once in a while, but it was clear that this is not supposed to be like this. So I decided to change my strategy and introduced a better container for my pots.

At the same time I started an A B testing sort of thing and put a few seeds that I spared into a Petri dish.

My wife was so nice to give me one of her very valuable plastic boxes that are part of the family treasury and travel all the time bringing the joy of cookies and cakes to some more distant relatives. This specific box was exposed to the plague of fish smell and could not be used for sweet delights any more.

So now the plastic box vs. the Petri dish 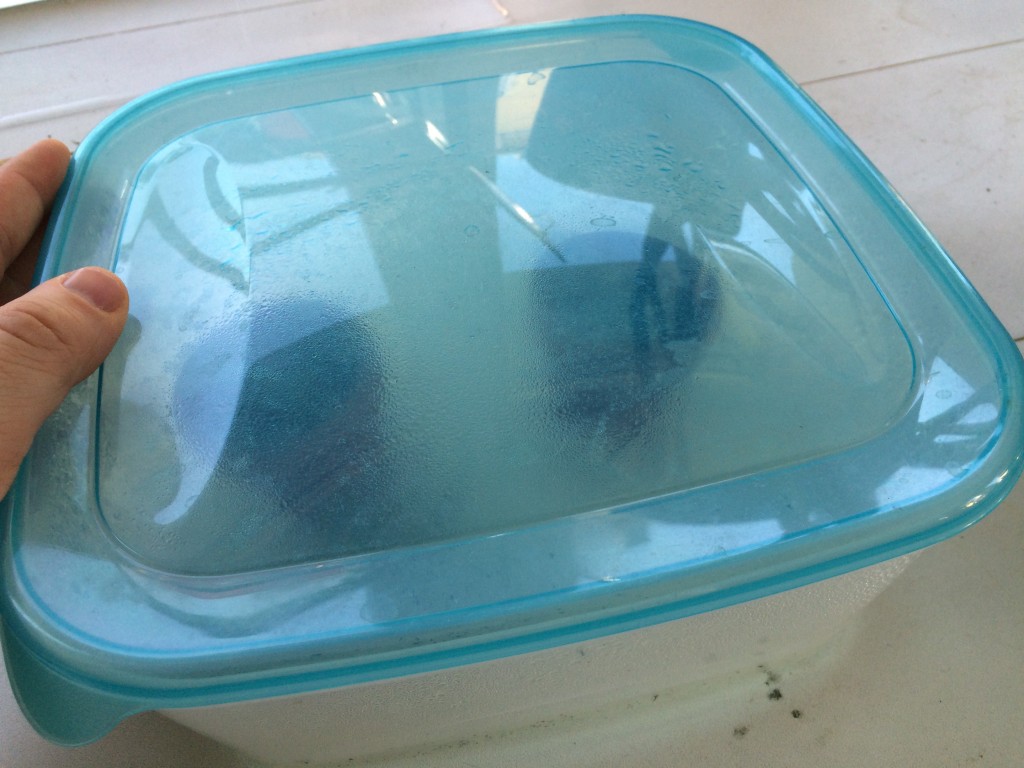 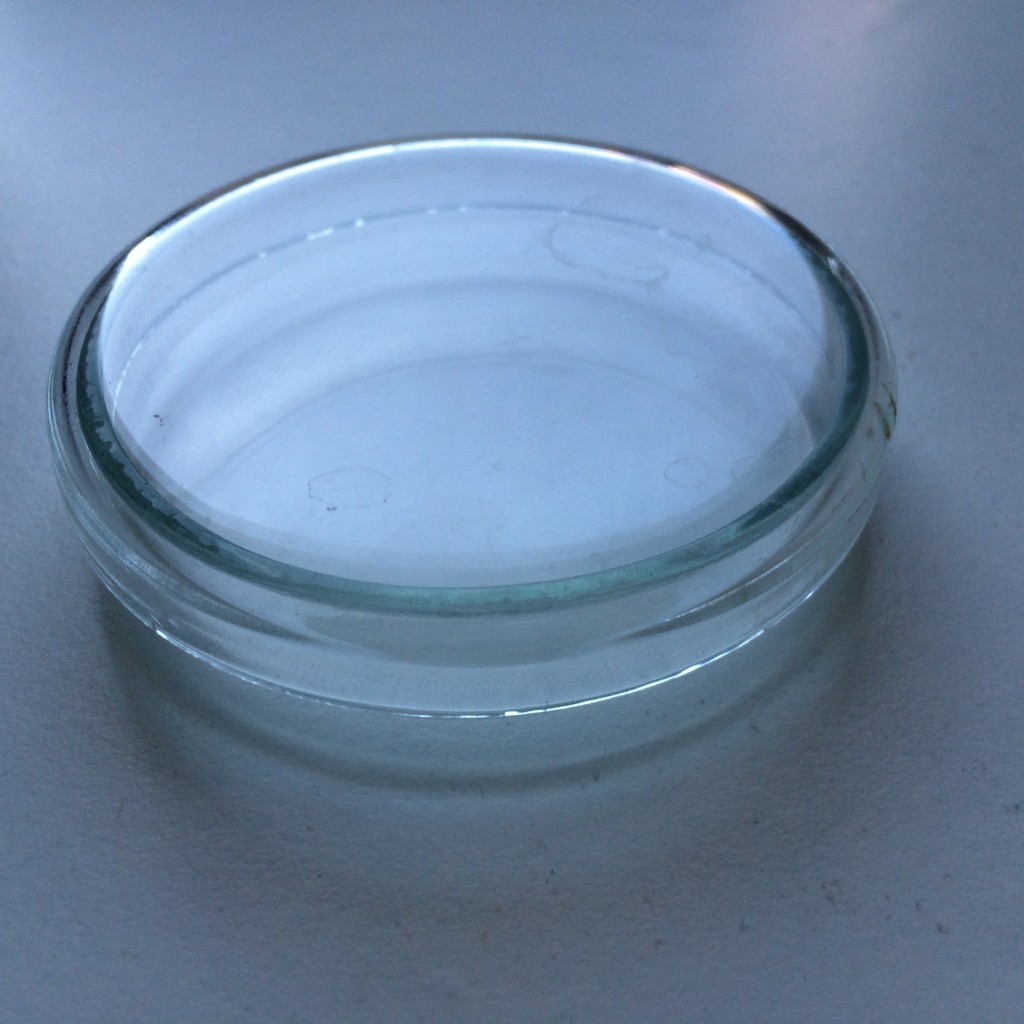 I poured water into the plastic box so that it covered the entire surface and reached up to 1-2 millimeters above the bottom of the pots. I closed the box and put the desk lamp back on.

This happened sometime in November. My cactus seeds had a long way to go, but I was relaxed to see the moisture on the walls of the box all the time. Same with the Petri dish, so I left things alone and waited.

The first glimpse of my cactus seedlings

It happened unexpectedly on a February morning. I started growing some early plants for our balcony, and I saw the first sunflowers emerging from my little tabletop lighthouse.

Then I looked over to the plastic box and could not really see a thing because of the moisture. I don’t know why, but I took a closer look and saw these little guys. 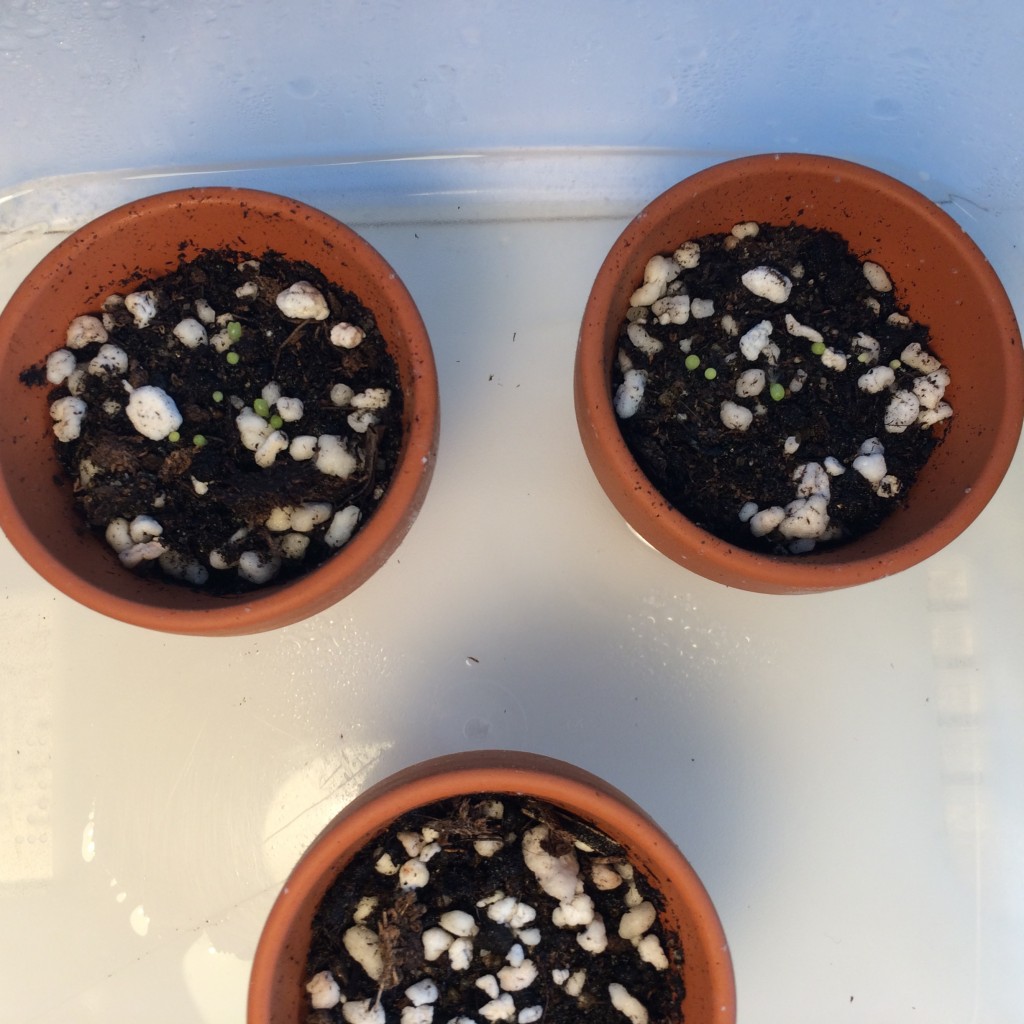 The miracle has happened and I knew I have come to the point that was not covered in the Youtube video.

What happened to the Petri dish, you may ask? Meanwhile I gave up on that experiment and dumped the whole thing.

Where to go from here?

First I kept on with the same daily routine as before. The cactus seedlings were growing and looked a healthy green. I had no idea when to bring them to the real world, all I knew I had to do it gradually.

I used to open up the top of the box and let a little air flow in. Later I removed the box cover, but still kept the pots in water. After a month or so I put the pots next to my other cacti.

I made a mistake. My little seedlings turned a brownish red and looked very sick. I lost one of the three pots, where my seedlings died. I knew I made a mistake, I just did not know what is the right thing to do.

Thank God, my wife is always there when I’m in need of ancient wisdom. She told me to put the remaining seedlings back to the box, fill the box with water as before and calm down.

Thus my seedling family lives back in the box again and they have already fully recovered.

Now I will be more careful reading the signs, and will consult my wife before moving my little seedlings into the real world again. Hope it’ll be alright next time.

Here is the photo of the little guys today. 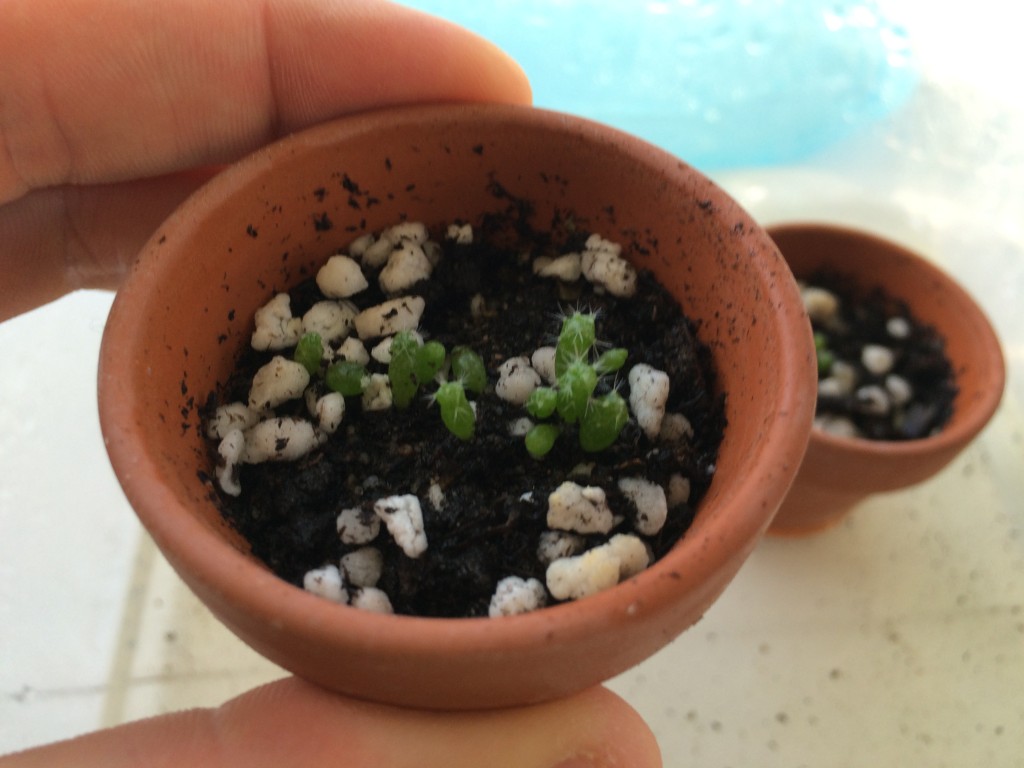 Get notified about new tutorials and articles.

Chat about tech questions and topics in our newly forming community.

Get job ready with Docker

Learn Docker from my book!

Learn Docker from zero to building a real project.

$34.99 $0.00 - Help solve the coronavirus crisis, download the book for free until April 31 and build something useful.